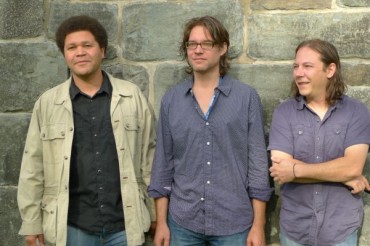 Scrapomatic have been at it for thirteen years. Four albums in, the duo consisting of Mike Mattison and Paul Olsen, are still flooring audiences with their uncompromising sound. “It’s like songcraft and the blues had unprotected sex,” says vocalist and co-songwriter Mike Mattison. “We’re not sure what it is, but it’s spreading.”

“Blues, roots, Americana, country, yeah, that’s us,” adds Mattison. “But we’re not just trying to update the sound so the kids will like it. In fact, fuck the kids.”

“The trouble with band bios,” says Mattison, “is that they become lists of influences. That’s well and good, as long as it stays that way. Nowadays, P.R. people just say: ‘These guys ARE the Rolling Stones or this singer IS Aretha Franklin.’ Metaphor has replaced simile. It’s disrespectful. I’ll give you a list of acts that inspired us to rip them off. I think that’s more honest. Taj Mahal, Nina Simone, Tom Waits, Dr. John. Apologies.”

Since meeting each other at a P-Funk concert in Minneapolis in 1994, Mattison, a recent Harvard grad with a degree in American Literature and Olsen, then completing his degree in music composition at the University of Minnesota, developed a rich creative relationship. “Immediately, collaborating was a snap. If one guy couldn’t finish a line or a musical idea, the other one would. I think we shared a Midwestern worldview: somewhat fatalistic, laced with dark humor. That’s what drew Paul and I to the blues. Howlin’ Wolf, Skip James, Charley Patton: Their musical and lyrical tone made sense to us. People think of the Midwest as the ‘Heartland,’ as a wholesome place. But it’s not. When you break it down it’s pretty bleak. We’re proud to be from the Midwest. But even prouder to have left.”

The duo moved to New York City, formed Scrapomatic and made a name for themselves on the singer-songwriter circuit. “We were playing the same joints as Norah Jones, Joseph Arthur, all of those early-2000s people. We developed quite a following, but I don’t think audiences knew where to file us. Bands were whisper-singing about their ex-girlfriends, then here comes Scrapomatic screaming about transvestite motels, spittle flying everywhere.”

Veteran producer John Snyder (Etta James, Ornette Coleman, James Cotton, Clarence “Gatemouth” Brown, Chet Baker) found Scrapomatic through his son Ben, and understood where the boys were coming from. “Snyder got it. And we got him. He put together a crack band down in Maurice, LA, at Dockside Studios; the best of New Orleans: Johnny Vidacovich on drums, Bob Sunda on bass, Larry Sieberth on keys. Making that first album was like getting a funky Phd.” Scrapomatic’s eponymous debut was released on Snyder’s revamped Artist House label, and was eventually named one of the Boston Globe’s “Top Ten Hidden Gems of 2003.”

As Scrapomatic’s star rose, Mike was picked up by slide-guitarist Derek Trucks and began touring with the Derek Trucks Band in earnest. “It was fortuitous. Derek’s singer had left [Javier Colon, who would go on to win season one of NBC’s ‘The Voice] and he was in a jam. John Snyder, who produced Derek’s first three records, recommended me; so did Chocolate Genius [singer-songwriter Marc Anthony Thompson] who we had done some shows with. The apocryphal story is true. Derek received two Scrapomatic cds from two separate people at his hotel in New York. He recognized me on the subway from the album cover. We chatted.” Mattison would go on to win two Grammys with Trucks: 2009’s Best Blues Album for the Derek Trucks Band’s “Already Free,” and 2011’s Best Blues Album for the Tedeschi Trucks Band’s “Revelator.”

“Derek has been such a great friend and mentor. His wife, Susan Tedeschi has too. I’ve learned musicianship, professionalism, how to tour and how to navigate the music business. Invaluable stuff. And I’ve seen the world! We’ve played on five continents, played in every state (except Alaska); appeared on Leno, Conan. I’ve been blessed to sing onstage with legends like Taj Mahal, the Allman Brothers, Santana, Herbie Hancock, Solomon Burke. It’s mind-boggling.”

Yet in the intervening years, Scrapomatic still managed to produce four beloved albums: “Scrapomatic,” “Alligator Love Cry,” “Sidewalk Caesars” and this year’s “I’m a Stranger (and I Love the Night) — the latter three on Atlanta-based Landslide records. Paul forged ahead as an in-demand musical director for solo performers, and picked up two ASCAP songwriting awards in the process.

“Thankfully, Paul and I have the creative engine of Scrapomatic. It’s where we go to refuel. Paul’s ability to turn out song after devastating song still amazes me. And unlike so many in this business, Paul is musically generous. He’ll sit down and write a tear-jerking masterpiece in front of your face and then tell you that YOU wrote it. The fact that he is not a household name is disconcerting. Maybe Scrapomatic is holding him back?”

Another element holding Scrapomatic back is the Alabama-bred guitarist Dave Yoke, who joined the group in 2007. “We call him the ‘Douchetown Rambler.’ He’s sick.” Yoke has been a professional musician since his teens, mostly in the Atlanta area and, like Olsen, clocked time in Susan Tedeschi’s band. “Yoke is the missing ingredient. He’s not just a blues guy. He can go ‘Jazz Olympics’ or straight Chet Atkins if he feels like it. Plus, he and Paul have uncanny guitar intuition. You just press play and let them run.”

Mattison pauses to explain the band’s growing momentum. “I used to say coy stuff about how we honor roots music while looking to the future. But now I just say: ‘What’s not to love?!’”

This November, select east coast venues are sure to be filled with the flavors of blues and soul, as Scrapomatic and co-headliner Shannon McNally & Hot Sauce join forces for a run of dates together. The pair will make their debut in Brooklyn, New York, and continue down south with […]

SCRAPOMATIC TO SUPPORT THE WOOD BROTHERS ON COLORADO RUN

Fans of great roots and urban blues music in Colorado have something special to look forward to this week as Scrapomatic kicks off their stint supporting The Wood Brothers this Thursday. The two impeccably well paired bands will team up for performances at the Armstrong Theater in Colorado Springs (10/21), […]