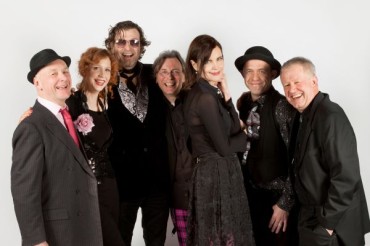 Sadie and the Hotheads

Yes, yes, Sadie and the Hotheads are Elizabeth McGovern’s band. But despite the transatlantic, Oscar-, Grammy- and Golden Globe-nominated star of Downton Abbey being the central figure, this is far from simply being time off from the day job.

Sadie and the Hotheads are a real band, quite simply, one of the most fascinating acts around today playing…well, it’s difficult to say exactly what they play. Elizabeth’s sometimes winsome, sometimes sultry vocals – and quirky, off-the-wall lyrics – front a world of musical influences, from 60s pop to country, esoteric folk to jazz, Celtic to torch songs. But nothing for very long – just when you think you’ve got a handle on what’s going on, they’ve swished and swirled and danced on to something completely different.

And while Sadie’s found fame of late, thanks to the global appreciation of Downton, this is no hastily put together group of individuals. The band have been gestating, creating, and imagining their curious and thoroughly engaging brand of world music for a number of years,. “I’m not a solo performer,” she insists. “Without these musicians I wouldn’t exist.”

Yet McGovern is the poster girl of fiftysomething women (happy to declare that it’s the decade when a woman is at her sexual peak) and has worked single-mindedly to create something new at a time when it would have been all too easy to sit back and simply enjoy her Downton fame.

It all started in 2007 when Elizabeth, long given to writing and strumming, responded to an ad for a guitar teacher and engaged the services of Steve Nelson. Steve was – and, indeed, still is – one of the Nelson Brothers, along with Simon, a much admired act in the British country-roots scene.

The pair hit it off and soon Steve was not only helping with Elizabeth’s playing but also her writing. It wasn’t long before Simon, a breathtaking guitarist himself, was on board along with chums, including drummer Rowan Oliver from electro-pop act Goldfrapp, and created the extraordinary album I CAN WAIT. The record received lavish reviews such as “a great pop record” and “intriguing and very catchy”.

Elizabeth’s film credits include Robert Redford’s Ordinary People, and Ragtime, for which she was nominated for an Oscar as best supporting actress but she’d moved to England from the US to start a family.

“I had more time on my hands,” she reflects. “I wasn’t working quite so much, my kids were a lot younger – there was an empty space there for me to live in and fill up. That’s why it happened.”

But she, and Sadie and the Hotheads, hadn’t bargained for the astonishing rise of Downton Abbey. The band played occasional dates but hung on in there as their singer worked tirelessly and, against all the odds, five years later came up with a second album, HOW NOT TO LOSE THINGS, featuring guest vocals from Downton co-star Michelle Dockery. The same unusual instrumentation remained (Simon and Steve playing all things stringed, including dobro, mandolin, banjo, ukulele and even bouzouki) yet the band had progressed, becoming more assured while still retaining their playful and intelligent outlook.

More shows followed and a stable line-up, with the Nelsons, original member Ron Knights, pianist Nick Lacey, percussionist Terl Bryant and vocalist Danica Chapman, a line-up that between them has worked with everyone from John Paul Jones to Joss Stone, Walter Trout to Faith Hill, Mavis Staples to Roddy Frame.

The band toured in 2014 with Mike Rutherford’s Mike and the Mechanics (Elizabeth sometimes making a mad dash from Downton set to stage), have appeared at the Isle of Wight Festival twice, have played a string of dates at the Edinburgh Fringe and opened for Sting at the Montreux Jazz Festival.

As well as breathtaking original material, there are also covers that say much about the band’s breadth of vision – an ethereal take on the Bee Gees’ Staying Alive and beautiful, dreamy rendering of the Rolling Stones’ Wild Horses. The record crosses more borders than ever before, being at once a cutting edge creation while never likely to offend her TV followers

And given Elizabeth’s celebrity status, the band has celebrity fans, including former BBC1 controller Alan Yentob and actor John Malkovich, who were both there to see a packed but low-key performance in West London’s Troubadour. The band are now set to conquer America with PBS – which screens Downton – ready to record them in concert for a TV special.

Ask Elizabeth what Sadie and the Hotheads are about and she admits: “Even I find it very difficult to describe – it doesn’t slot into any one thing, but that’s what makes it special.”

Sadie and the Hotheads are:

Check out this article on Sadie, the Sexy Rocker  or these press releases regarding their first ever U.S Tour coming this winter!

As the Downtown Abbey program is coming to it’s end, with the 6th and final season beginning shortly, the cast has been ramping up their appearances and presence on social media.  Elizabeth McGovern, who also splits her time as leader of Sadie and the Hotheads band, is shown here with […]

Just released is a live performance video from Sadie and the Hotheads and an intimate interview with Elizabeth McGovern filmed for the Infinity Hall Live series on Connecticut Public Television (CPTV).

Heatin’ Up the East Coast

Sadie and the Hotheads rocked the east coast on their first, “little”, U.S. tour. Elizabeth McGovern and her band visited Annapolis, Albany, Connecticut (twice), and Rhode Island; bringing some warmth to our cold winter days!

A Evening with CPTV and Elizabeth McGovern

Last night we attended a wonderful event hosted by Arnold and Sandra Chase to benefit CPTV (the Connecticut branch of PBS), specifically honoring Downton Abbey with celebrity guest, Elizabeth McGovern. The benefit guests enjoyed: the music of Elizabeth’s band, Sadie and the Hotheads, played on a  high-definition screen as well […]

Come meet Elizabeth and her band

Did we mention that Sadie and the Hotheads will be offering special VIP packages at their U.S. gigs!? This very special VIP package includes: meet and greet opportunity with the band and Elizabeth McGovern, special VIP laminate souvenir, guaranteed seats in the 1st 5 rows (where applicable), autographed tour item, […]

Just announced this morning, Sadie and the Hotheads will be coming to the U.S. this winter for their first tour on this side of the channel! Yep, that’s right Elizabeth McGovern (Emmy & Golden Globe nominated actress of the smash hit television show Downton Abbey) and her band will be […]

The Wait is Almost Over

The new album, “Still Waiting”, from Sadie and the Hotheads – that’s Elizabeth McGovern (Emmy & Golden Globe nominated actress of Downton Abbey) and her smashing band – is scheduled to be released on October 2, 2014!

It’s Going to Be ‘Hot’ at Wychwood Fest!

As an Artist Ambassador for World Vision, Elizabeth McGovern and the whole Sadie and the Hotheads crew will be performing at the wonderful family friendly Wychwood Festival‘s 10th ‘Birthday’ Celebration this Sunday. World Vision is an amazing organization that works to improve the lives of children in the poorest areas […]

One of ETA’s newest acts to the ETA familySadie an the Hotheads, staring Golden Globe and Emmy nominated Elizabeth McGovern of the hot show “Dowton Abbey”! Take a minute to check out this recently recorded Everybody’s Got a Song music video from their newest album Still Waiting released on February 10th.